Congratulations to dr. Paweł Strzempek for defending with distinction! His PhD thesis “Development and evaluation of a signal analysis and a readout system of straw tube detectors for the PANDA spectrometer”.

You can find his work under this [link]

Recently two of our colleagues have defended their thesis based on research involving FPGAs.

The first one: “Particle track recognition on FPGA devices”, by Emilia Pieczonka and

The second one: “Particle track reconstruction on FPGA devices” by Kuba Cierlik

On Monday 2nd of May 2016 we have finished a successfull, two-week beamtime in Forschungszentrum Juelich GmbH for our prototype of Forward Tracker constructed for PANDA (FAIR, Germany).

Great amount of work was needed in order to condition the detector and also for the design and evaluation of its FPGA-based readout system.

The use of TRBv3 hardware together with the software environment for data processing, resulted in very smooth data collection and achievement of low-noise, high-resolution results. 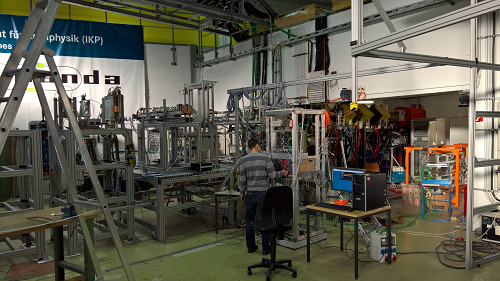